“And so it was, that, while they were there, the days were accomplished that she should be delivered.
And she brought forth her firstborn son, and wrapped him in swaddling clothes, and laid him in a manger; because there was no room for them in the inn.” (Lk 2, 6-7)

The portrayal of the birth of Jesus, as imparted to us by the Gospel, began in early times. The first Christmas drawing, made in the 4th century AD, depicts the infant Jesus with his mother Mary. Nevertheless the illustrations were rare and to be found mostly on sarcophagi.

In the year 1223 AD, St. Francis staged the nativity scene in a very detailed manner. He celebrated the Christmas Mass in front of a wooden manger and with a living ox and donkey. By doing this he gave people a better understanding of the birth of Jesus.
The nativity scene has always captivated people around the world. Jesus was born by a simple woman and as son of a poor family. The poverty and the natural birth of God’s son enabled people to feel that he was one of them. They could identify with him. But the contrast between rich and poor, embodied by the kings and shepherds, is insignificant facing God’s son. All kneel down and worship the newborn child.
Since the 13th century Jesuits and Franciscans successfully spread the idea of the nativity scene all over the world: numerous nativity plays have been performed, mangers have been put in front of the altar, frescos have been made, as well as paintings and carvings with the Nativity as their subject.

In Alto Adige/South Tyrol portraying the Nativity has a long tradition; the first portrays can be found on ancient manuscripts and seals. The famous Christmas scenes in the chapels of the castels “Schloss Tirol” and “Hocheppan” as wells as in the cloister “Via Crucis” in Brixen date from the early Gothic period. An important fresco dating from the later Gothic period can be seen in the St. Jacob Church in Val Gardena. All those representations as well as the many Nativity altars in Alto Adige/South Tyrol are the precursors of the actual nativity scenes.

During the Age of Enlightenment, the nativity scenes were banned from churches and monasteries. Yet the faithful did not want to abandon their loved nativity scenes; they put them into their home with no further ado. That’s how the nativity scene found its way into farmhouses and mansions. Craftsmen and farmers started to produce those family nativity scenes. Especially in Val Gardena, where for an additional income many farmers spent their time carving during the cold winter months, a great artistry quickly developed. Although at their beginnings rather primitive those first carved nativities “flew” of the shelves and are today of great historical, cultural and artistic value.

Over the years the woodcarvers of Val Gardena became master craftsmen and the sacred art became much more popular. Numerous workshops were opened and the valley almost had a monopoly in the creation of carved wooden nativity scenes, which were exported all around the world.
The oldest preserved nativity scene from Val Gardena seems to be a Baroque carving from the Vinazer workshop depicting the Adoration of the Magi. This master piece of Baroque art was created in the 18th century and displayed for decades in the St. Jacob Church in Val Gardena. Today it is preserved in the museum of Ortisei.
In the 20th century several styles develop in the art of nativity carving. Those styles range from folksy, traditional and classic to modern and figurative. Some sculptors even reached an abstract, artistic level.
The tradition of the carving of nativity scenes, which was cultivated and developed over four centuries in Val Gardena, still has an important place within the local woodcarving activities and can be admired in exhibitions around the world.

But a nativity scene from the workshops of the woodcarving manufacturers association Gardena Art is above all a precious family property, which gives Christmas a special glamour every year. The trademark GARDENA ART guarantees the quality and origin of the family’s nativity in Val Gardena.

A GARDENA ART nativity is a precious and ageless symbol of unity and peace. 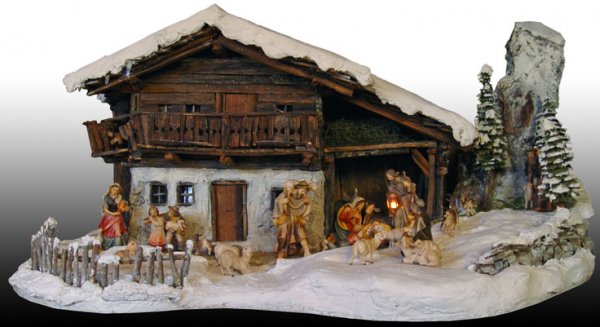